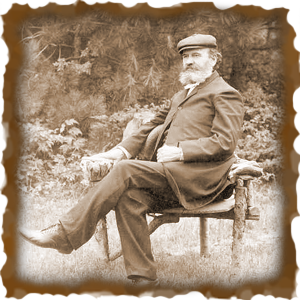 “He was a cultured Christian gentlemen, a poet, a great pulpiteer, a wise counselor and a sympathetic friend. His forceful missionary sermons kindled a fire in the hearts of his hearers and changed viewpoints about worldwide evangelization.” So stated the late Dr. R. R. Brown, Alliance pastor for many years in Omaha, Nebraska, speaking of Albert B. Simpson.

Simpson described his own strong feelings concerning evangelism in relation to his pastoral ministry at the Thirteenth Street Presbyterian Church in New York: “For two years I spent a happy ministry with this noble people, but found after a thorough and honest trial that it would be difficult for them to adjust themselves to the radical and aggressive measures to which God was leading me.”

Simpson modeled boldness to those who seek to follow Jesus Christ passionately. Early in his ministry, as pastor of the largest Presbyterian church in Louisville, Kentucky, Simpson realized almost from his first day that public evangelistic services were necessary, though his idea was decidedly different from the ordinary religious program carried on in that conservative area. Other pastors were willing to cooperate in this venture for a limited time, but Simpson yearned for continuous evangelism. When he failed to convince the other churches “he determined to attempt it himself. Public Library Hall…was engaged for these Sunday evening meetings, and the evening service in Chestnut Street Church was suspended.” The city was stirred, and Simpson’s church received one hundred new members, eighty-four on profession of faith in Jesus Christ. However, after a time, “subtle opposition prevented the use of Public Library Hall.”

Then Mr. Simpson went straight to the owner of Macauley’s Theater and requested permission to use it (one of the largest and most popular amusement centers in downtown Louisville at the time). “It must have been a bit of a surprise to the gentleman who owned the theater, for he was painfully aware of the low esteem in which he and his worldly business were held by the church people. It was a wholesale smashing of religious precedents by the Chestnut Street Church. Simpson’s biographer concluded: Popular? Sure it was popular, and it was frowned on by many of the sterile scribes of the synagogues, but to Mr. Simpson the word ‘popular’ carried no terrors. It means ‘of the people’ and it was the people he was interested in.”

While Simpson was still in Louisville he came to realize that “a new all-out effort was needed, a wider dissemination of missionary information, a magazine…to promote the work of missions. He would launch a new kind of publication, one devoted wholly to the cause of world missions…Why not get into step with the modern trend toward pictures and illustrations? It would be different. He would illustrate his new magazine with the newest type of woodcuts and maybe, later, engravings made from actual photographs taken on the trail. Just a few years later (1880) he launched ‘the first illustrated missionary magazine on the American continent’, and, with one exception, the first in the world.”  It was The Gospel in All Lands, forerunner of what is now the Alliance Life magazine.

From Louisville, Simpson transferred to the Thirteenth Street Presbyterian Church in New York City. However, after a short while it became apparent that “their ideals and his were irreconcilable. Its members were well-to-do people, fairly along toward the top of the social ladder….They welcomed any new member who was of their own kind.” Simpson, on the other hand, “wanted his church to give up its narrow exclusiveness and become a center for the evangelization of the masses….One day the pastor came before the session and asked permission to bring into the church upwards of a hundred converts from the Italian quarter, which he had won while preaching on the streets down in the poor neighborhoods.” The session was horrified because they believed that these poor converts “would not be the social equals of the rest of the members.”

Without any spirit of contention, but after a week of intensive prayer in his study, Simpson completely withdrew from his denomination in order to follow God’s calling on his life. He lost no time in getting started upon his new project. Through the newspapers, he announced a Sunday afternoon meeting to be held in a cheap place on Eighth Avenue known as Caledonian Hall, where he would deliver an address on the spiritual needs of the city.

Out of that meeting at Caledonian Hall, and subsequent meetings, a band of people burdened for the lost masses of the city gathered around Simpson. They met in all kinds of places—the Academy of Music, Steinway Hall, Grand Opera Hall, a tent on the street and even in Madison Square Garden. “They were attempting a work so radically different that they had no precedent to guide them….From hall to tent, from tent to theater or on to some abandoned church went this happy band of soul winners. Always they were busy at the one task to which they believed God had called them-that of bringing lost men to the Savior.”

Even after the Gospel Tabernacle was built and they had a more stable base, Simpson and his followers continued to be pioneers for Jesus Christ. Simpson and his workers opened a number of rescue missions to bring Christ’s love to the poor. “Groups of trained gospel workers visited the hospitals and jails every week with the message of hope. Earnest efforts were made to reach and rescue the fallen women that swarmed in certain sections of the city. A free dispensary was maintained for the poor of that neighborhood known grimly as ‘Hell’s Kitchen.’ Special services were held for the sailors that crowded the waterfronts. An orphanage was opened for the poor of the city streets, and other efforts were made to relieve the destitute and suffering wherever they were found within the great melting pot of New York.”

The missionary convention, which is so widely used today and so blessed of God, is another of Simpson’s ideas. “As far back as 1883 while still in the old Twenty-Third Street Tabernacle, Mr. Simpson inaugurated a new type of meeting, which he called missionary convention. This was original only in the sense that it achieved for the first time a synthesis of the best features of several other kinds of public meeting, and succeeded in producing in one place and at once a Bible conference, a camp meeting, and evangelistic campaign and a missionary promotional meeting.” Simpson did not feel that a believer should isolate himself from other Christians. Speaking to a fellow worker about the wide variety of speakers, he said, “You know, brother,…they say the number of speakers on my convention platforms makes my announcements look like a small-town telephone directory. But I have a good reason for all that …. I want my people to receive the benefit of the ministry of all God’s gifted servants, regardless of whether they agree with me in everything or not.”

Dr. Simpson always kept his eye on the homeland. In fact, “there was no ‘at home and abroad’ in his concept of missions. When he lifted up his eyes on the fields, they were everywhere white unto the harvest. To him the multitudes of New York and our great American continent were as sheep without a shepherd, just as were the vaster multitudes in the deeper darkness of heathen lands.” And he usually had a new project brewing-a school, an orphanage or another mission.

The pioneering spirit of Dr. Simpson was firmly evidenced by the recognition on his part that missionaries need a high level of education and training for their work. Zeal and good intentions are not enough. In a day when an eighth-grade education was highly acceptable and high school was for the privileged few, the New York Training College was established in 1883 for training missionaries and home workers. It was later moved to Nyack, New York, and was the first Bible college in North America.

When the world learned of Dr. Simpson’s death, hundreds of moving tributes were received. Perhaps the words of Rev. E.A. Kilbourne, of the Oriental Missionary Society, best express what we have been trying to say: “His influence was not confined to the ranks of The Christian and Missionary Alliance, but preachers, missionaries, editors and people of all denominations have been moved and stirred by his untiring zeal for the cause of Christ in all the world”

A.B. Simpson wanted everyone to know the complete sufficiency of Jesus Christ for every human need. Jesus is our Savior, Sanctifier, Healer, and Coming King. Many people look for the wonderful gifts and blessings that God provides, but Simpson reminded us that Jesus Himself is God’s greatest gift to us.

Simpson’s ultimate goal was to point people to Jesus. A more full account of how God worked through A.B. Simpson is available in biographies about him such as: Wingspread, by A.W. Tozer; and A.B. Simpson: His Life and Work, by A.E. Thompson.

63 Conneaut Lake Rd.
Greenville, PA 16125
Get Directions724-588-7167info@greenvillealliancechurch.orgLike us on FacebookFollow us on TwitterFollow us on InstagramWatch on YouTube

If you have an emergency and need to reach a pastoral staff member, please call the church first before trying their home number. Remember if at any time you have a prayer need, please consider contacting your care elders or the ministry staff. You may call the church office at 724-588-7167.